Lynn
Owner
&
Station Manager
& all around Nice Guy!
After 30 years in the Hospitality Industry working with such major franchises as Holiday Inn Worldwide, Best Western, Days Inn, Quality Inn and Imperial Hotels Lynn was introduced to the world of radio
by Larry Hestand the owner of Northeast Oklahoma Radio.

Never being in the radio industy, but with a love of music,
he wanted Larry to teach him the ropes, and with the help of
OzarkRadioEureka’s Ken Rundel, more than just playing great
music was learned.

Becoming the AMPS Director ( Advertising, Marketing, Promotion,Sports) Lynn created new live radio shows and
was the host of the popular “ Porch Sittin’ in Shell Knob” as
well as the  “Sport Roundtable”, “The Power Hour” and was
the voice of Eureka Springs Highlander Basketball and
​yada
yada yada!!! 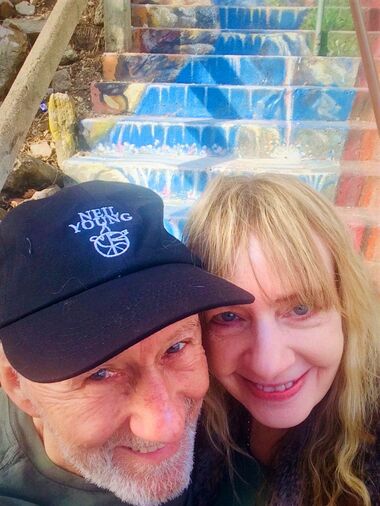 ​​The Flower Power Hour features music from the Golden Age of Flower Power – the 60’s and 70’s, plus like-minded tunes from the 80’s right up to today.  The husband and wife team of Ken and MJ invite you to join them every Monday thru Friday at 10 a.m. and 10 p.m. as they do their show from the George Carlin Studio in the Bamboo Peace Palace in Eureka Springs. They’ll rekindle your spirits with great album rock, including deep tracks you’ve forgotten or never heard of. Plus you’ll be turned on to the best new music coming out today.
​Ken Rundel’s extensive radio experience included early stays at WVIC, Lansing, MI, and w-4, Detroit. Next up was the legendary album-rocker, “The Zoo” in Dallas, where he was program director and had the #1 rated midday show. He’s interviewed dozens of musical icons and lists Joan Baez, Steve Miller, Nancy Wilson, Keith Reed, Willie Nelson, Don Mclean, Roger McGuinn, and Michael Brewer as some of his favorites. Other stops included Q-102, KZPS, KOAI, KRBE and KXCC in Texas,KESA (back when it was good,) and the ABC Radio Classic Rock Network, where he was the top-rated jock. Ken’s also done acting, improv comedy, and public relations.
​
MJ grew up in St. Louis, Missouri, addicted to the heritage album rocker, KSHE-95. Her talent as an artist gave her incredible backstage access to all the early icons of album rock, including Cat Stevens, Alvin Lee, Jon Anderson, Donovan, Randy California, Elton John, and Ian Anderson. Her beautiful, mind-blowing posters graced the dressing room doors of all the greats.

​The Flower Power Hour: Peace, Love, and Rock and Roll.

​​Andrew
Audio, Video &
​Computer Tech
Wanna know the guy who keeps us up to date on the latest tech and who helps us set up and keep our studio and equipment running smoothly…….It’s this guy, AJ Worley.

With a creative mindset all his own with his own video creating business, AJ is our resident tech Guru who also at times happens to join us on the radio live or with ads.

If you wanna know what it takes for us to go Live with OzarksRadioEureka, whether it’s radio or web tv…it’s this guy,
​AJ Worley!
Lynda Law
All the Way from the UK
OzarksRadioEureka is ecstatic to bring you the Lynda Law Radio Show Monday and
Friday at 6 pm with something different and exciting.

​NOW more about Lynda Law…..
The press describes Lynda as a unique white soul voiced singer from England.
Lynda had two chart hits in UK/Europe with "Somebody Somewhere" and "I Don't
Want Your Love" And she won the SKY TV talent programme "Sky Star Search" which was televised all over the world.Some of Lynda Law’s  other achievements include supporting some of the best acts in the World:
Lynda sang in the USA on the Gino Vannelli album "Inconsolable Man" where she was featured on three tracks including "Moment To Moment" which was a worldwide hit.
Lynda’s musical  acievements so far incude:
Not only is she a first-take recording artist, Lynda is also quite successful as a radio
presenter.

Since 2018 she has been on various radio stations in the UK, Belgium, The Netherlands, Italy, Spain, The Philippines but also in Canada with The Lynda LAW Radio Show and NOW in the USA on OzarksRadioEureka.com  where she plays specialized Soul/Jazz/Funk, and likes promoting new talent to the music industry by airplay and is always looking out for good music to play on her show.